I haven't given up 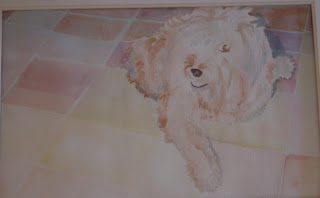 I'm still working on the city scene. I'm not happy with my taxis or my buildings. What else is there? I told Jim that I'm going to see if I can get rid of some of my buildings and do them over. Being a Vegas boy, he had one word for me, "implosion".

Here is a painting I did of my sweet girl, Desi. She was just wonderful. I did this several years ago. It's on a half sheet of Arches 140 lb. cold press paper.

After lunch, I'm going to finish Big Yellow Taxi. If it doesn't work out, I'm moving on!
Posted by Candy at 10:42 AM No comments:

I've been waiting to post until I finished a DSFDF/Karin Jurick challenge. It's not the current challenge. I selected the one prior to that. I saw it just before the deadline and I wanted to paint it even though I wouldn't have it finished in time to submit. Well, it's still not done and I would like to say that it's really hard! Every time I look at it I start singing Joni Mitchell's Big Yellow Taxi because (yes, that's right) it has a big yellow taxi in it. In fact, it has several. Yikes! They are difficult to paint! No offense intended to Joni, but it's easier to sing about them than to paint them.

I would like to let anyone in the Las Vegas area know that Mary Warner has a show coming up in the Donna Beam Fine Art Gallery from June 19 to Jul 31. She and her art are very cool. If you haven't seen her work, check it out. She does a lot of florals. She works in acrylic and watercolor. I think she does some oil, too.

We had to take Cary Grant (my big bear cat) to the vet today. His brother bit him on the foot and it got infected. Poor baby. He's like one of Hemingway's cats with extra toes. I guess Chip Hilton, All-American Boy, just found the extra toe irresistible and chomped it. Anyhow, he's recuperating in the guest bathroom. He got a shot of a super duper antibiotic and I'm supposed to flush the wound twice a day until it heals. I'm so thankful for this new shot. It's supposed to last for ten days and that means I don't have to give him a liquid antibiotic. Hooray because giving a cat a liquid antibiotic is even harder than painting a big yellow taxi (even if the cat is a real sweetie like my Cary Grant)!
Posted by Candy at 6:28 PM No comments: 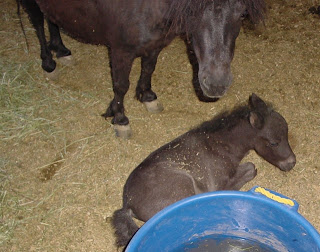 Last weekend Jim and I flew to Wisconsin for a visit. The only person who knew we were going to be there was my dad. We surprised my two sisters and my stepmother. My dad can keep a secret. We flew into Duluth, Minnesota on Friday and drove out to Solon Springs, Wisconsin. We stayed in Solon Springs, which is where Tammy lives and where my dad has a cabin. We had a great visit with everyone, but the time went by awfully fast.

Yesterday, Jim and I went to see a two-week-old miniature horse who belongs to a friend of my mom's. He is just darling. Later we went to see the Star Trek movie - excellent! Then, we went downtown to an open house at the Morelli house. It was a house built in 1959 on the Desert Inn Golf Course by the musical conductor at the Sands Hotel. He and his wife hung out with the Rat Pack and other stars. The house was moved from the golf course to a downtown location when Steve Wynn built his new hotel and destroyed the golf course. The house is so cool. I'm so pleased that we're learning not to lose all of our history. Las Vegas is a relatively young city, but we have an extremely interesting history. It's nice to know that somebody cares. It was an action-packed day.

I've got some ideas for new paintings - a desert scene, a series of me walking my sweet old boy, Teddy, and a robin (a little bit of Wisconsin here).
Posted by Candy at 7:23 PM 1 comment: 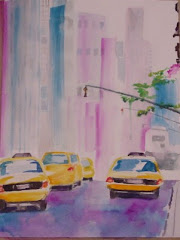